(Also known as: The Mini-ITX quarter-depth chassis that could fit a Micro-ATX mainboard)

I’ll be using this system for my FreeBSD hacking, but this post focus on the system hardware.

The story of this system started when I ordered my Super Micro quarter-depth (SC505-203B) Atom-based firewall named Kuiper from Nextron. The chassis specifications state it’s 24.9cm deep and 43.7cm wide (9.8″ and 17.2″ respectively), and would only fit mini-ITX boards.

As I was also interested in a Xeon E3v5 virtualization server, and would prefer it to be quarter-depth as well, I was a little disappointed that Super Micro didn’t have any mini-ITX mainboards for that platform. Nextron helpfully suggested that they could check if the Super Micro X11SSL-F mainboard (micro-ATX) would fit when building my firewall, as they had it on hand. It has the dimensions 24.4cm by 24.4 cm (9.6″ by 9.6″). I was not expecting it to fit as the depth of the mainboard was a mere 5 mm (0.2″) less than the chassis.

A few days later, when the firewall was built, they reported back: It fits! But they would have to sacrifice one of two 2×2.5″ drive bays. It was also a very, very snug fit, as can be seen in the image below. Excellent! I only need two data drives in that system anyway, and COULD use them as root drives if necessary. 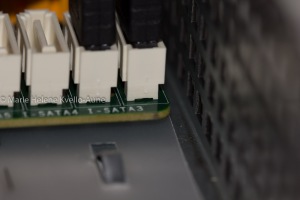 Snug fit! This is NOT the I/O side!

I was happy. Now, considering this chassis was designed for Atom systems, the PSU would probably not be capable of powering a 80W CPU, for not to mention the potential cooling trouble. Nextron suggested getting a 45W CPU, but I decided to pay the premium of getting a low-powered CPU, the Xeon E3-1240L, with a TDP of only 25W. 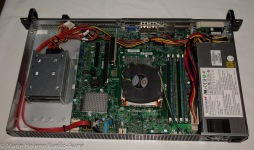 Overview of Venus’ interiors, as shipped from Vendor

Snug fit! This is NOT the I/O side!

See the tiny SATADOM? Hint: Look at the yellow SATA port in the middle.

Please note the pictures above were taken at different points throughout my process of modifying the system. The final setup (for now) has two SATADOMs and two SSHD’s, and is shown in this posts featured image, and is the last entry in the gallery above.

I should probably also mention that the chassis ‘curvature’/apparent bending seen in some of the photos is a trick of the lens.